Modern France was founded on “Liberté, Égalité, Fraternité” and that same formulation – liberty, equality and community – is at the heart of the free and open source movement. Of course, as “The Terror” proved in France, not everything done in the name of the revolution is actually good, and it’s important to return to core principles regularly to check they are still our destination and our revolution has not been repurposed for the benefit of a few. 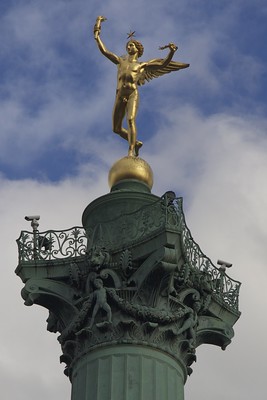 Paris in the 18th and 19th centuries was the nexus of global changes that spread the idea of the rights of the individual around the globe. If you weren’t educated in France, it’s likely it all seems very binary historically - a medieval monarchy before the Revolution and a prototypical Republic after, with a mess in between.

It turns out that things were nowhere near as straightforward, and France actually experienced a century-long cycle of republic, dictatorship and monarchy, each of varying character and cycle time. I noticed a detail on a familiar memorial to one of those cycles on a visit to Paris. The July Column in the Place de la Bastille – itself dedicated to the celebration of liberty after the French Revolution and its destruction of the infamouse Bastille prison in 1789 – was erected in memory of the fallen of the later July Revolution of 1830.

The July Revolution comprised three days of fighting in Paris, primarily on free speech grounds against state censorship and authoritarianism. Charles X, France’s last hereditary monarch, had imposed the death penalty for blasphemy against Christianity. He also suspended the liberty of the press and dissolved the newly elected Chamber of Deputies. The population rose in protest and were brutally suppressed.

The Column stands for the freedom of the people from the tyranny of their rulers. But today, the column is used as a platform for surveillance cameras. It is a symbol of the way any revolution can be repurposed. 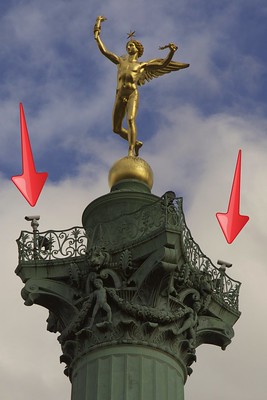 This article is under the CC-BY-SA license.

You can subscribe to this site with any ActivityPub (AP) software such as Mastodon. Just put that URL up there into your search box.

Images are my own unless otherwise mentioned.

No comments yet. Be the first to react!